The Good, the “Bad,” and the Good “Good” (Cholesterol) 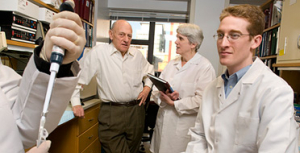 In the vanguard of a new generation of promising drug therapies for treating atherosclerosis with “good” cholesterol (high density lipoprotein, or HDL) is an agent being developed by Godfrey Getz, MD, PhD, the Donald N. Pritzker Distinguished Service Professor in Pathology, and Biochemistry and Molecular Biology at the University of Chicago.

Atherosclerosis is a condition in which artery walls thicken as the result of a build-up of fatty materials, such as cholesterol, that can lead to coronary heart disease. Most current drug therapies for atherosclerosis rely on statins, which lower the level of “bad” cholesterol (low density lipoprotein, or LDL). The new therapy Getz is developing, however, would reduce the size and number of existing plaques, thereby reversing the disease.

HDL is thought to be beneficial, at least in part, by carrying away cholesterol from the plaque via the bloodstream for excretion by the liver. This may either limit the formation of plaques or actively break down those already built up in the arteries. There are several kinds of HDL, however. Most fight plaques while others may increase them, harming the patient. Getz has developed a therapeutic agent that stimulates the production of the type of HDL that is thought to be beneficial.

Many aspects of Getz’s work are patentable, and UChicagoTech, the University of Chicago’s Office of Technology and Intellectual Property, is helping him protect this intellectual property. “Initially, I was reticent about contacting UChicagoTech because I had never patented anything before,” Getz said. “Then a student, Ron Carnemolla, pushed me into it and I’m glad he did because UChicagoTech has been very helpful in getting a provisional patent and introducing us to a number of potential partners and investors.”

Generating interest in Getz’s work has not been difficult since it has the potential to change the way coronary heart disease is treated, according to Wade Williams, Project Manager at UChicagoTech. “We have a queue of companies chomping at the bit, awaiting the results of Getz’s research, which is aimed at elucidating the regulation of HDL levels and HDL subclasses and discovering which type of HDL is most effective against atherosclerosis.”

Humans have two major subclasses of HDL: HDL2 and HDL3. Getz is using genetically modified mice that lack HDL and are prone to atherosclerosis to uncover which of the two is better at breaking down plaques. To do this, Getz engineered variant forms of apoprotein A-I that selectively induce the production of either HDL2 or HDL3. Apoprotein A-I is the major protein of HDL and it is responsible for the different subclasses of HDL.

In ongoing experiments, a virus that generates human mutant apoprotein A-I is being injected into mice so that they express either human HDL2 or human HDL3. The results are then observed and measured.

“If our hypothesis that HDL2 is more beneficial proves to be correct, and if we can create a transgenetic mouse to produce the agent that induces the expression of HDL2 in humans, it will provide a new approach to the treatment of atherosclerosis,” Getz said.

A native of South Africa, Getz became interested in the links between diet and fatty deposits in blood vessels when he noticed a discrepancy between the rates of heart disease among white and black South Africans.

“The principle reason for this was not heredity or racial, but dietary,” he said. “It used to be rare for black Africans to have a heart attack. Now that they’ve adopted the Western diet those numbers have increased significantly.”

“Coronary heart disease is one of the world’s biggest killers and I hope to ameliorate that,” Getz said.