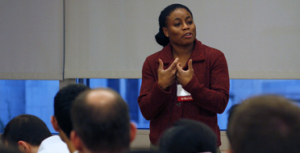 It’s no surprise that Intellectual Ventures, a leading global investor in inventions, hired Karen Kerr, PhD, to forge relationships with universities doing innovative translational research. After all, the recently appointed U.S. Head of Business Development earned her PhD (’95) in physical chemistry at the University of Chicago and had planned on pursuing an academic career.

Until, that is, Kerr became fascinated by inventing, investing and intellectual property near the end of her degree program. That’s when she began working on business plan development and technology vetting for ARCH Development Corporation (then part of the University). “I never looked back,” she said.

Kerr turned down a National Science Foundation post-doctoral position in chemistry to become a member of the first class of Kaufman Fellows, a program that identifies and develops emerging leaders in venture capital.

“It was a big switch from ‘rocket science’ to private equity,” she said. “Researchers look at things deeply and narrowly, but I found that I wanted to be an investor because you get to look at things broadly and make connections between science and business.”

After her fellowship, she returned to ARCH Venture Partners (by then split off from the University) and eventually became a managing director. Then Kerr founded Agile Equities, where she advised venture firms, start-up companies and university technology transfer offices. Kerr has invested across a broad array of companies in life science, information technology and communications. In 2000, Crain’s Chicago Business named her one of Chicago’s 40-under-40 leading business professionals.

Kerr has long helped her alma mater. She serves on the Physical Sciences Division Visiting Committee and the Alumni Board of Governors and is now reaching out to UChicagoTech, the University’s Office of Technology and Intellectual Property.

The 10-year-old Intellectual Ventures (IV) is an invention capital company with about $5 billion under management and a portfolio of more than 27,000 patents, which it helps to develop and manage. Meanwhile, IV has paid out more than $300 million to individual inventors worldwide while returning more than $1.2 billion to its investors.

“We bring buyers and sellers of patents together in better, more efficient ways,” Kerr said. “One way to do that is by stimulating innovation at universities. Of the 200, or so, serious research institutions in the U.S., we’ll ultimately work with about ten. We hope the University of Chicago is one because its researchers are so innovative.”

“I like to tell Alan Thomas [Director, UChicagoTech] that we’re here to leverage his budget…to give him more shots at goal,” she added.

John Hall, V.P. Acquisitions at IV, is also an alumnus (MBA’81). “Back then I felt the program was too mathematically oriented but it turns out that the methodology has been extremely useful in my finance career,” he said.

“Through Karen, we’re focused on developing a partnership with University of Chicago researchers, matching our capital resources, patent prosecution expertise and commercialization talents with some of the more innovative ideas from campus,” Hall said. “While this effort has just begun, we’re confident that our buy, build and partner business model is a good fit with the University.”

On October 7, Kerr was the speaker for an Innovation Workshop Series, organized by UChicagoTech and the Polsky Center for Entrepreneurship. “IV sees intellectual property as the next asset class, similar to equities and mortgage-backed securities,” she said.

“Ultimately, technology is in the service of humanity. Innovation capital should be focused on doing something for public health, making a corporation more efficient, resolving a business problemâ€¦and making some money along the way.”