Sanders Taps into His Alma Mater 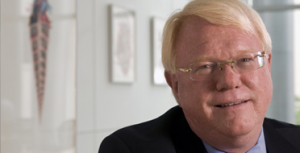 A few years ago, University of Chicago alumnus Martin E. Sanders, MD ’79, attended a “meet and greet” in San Francisco that was held to introduce the University’s new President Robert Zimmer, PhD, to local alumni. Sanders asked some questions during the session, after which Alan Thomas, Director of UChicagoTech, struck up a conversation with him.

That “tap on the shoulder” led to a request to help guide technology transfer at UChicagoTech, the University’s Office of Technology and Intellectual Property.

“I said ‘yes’ because I was looking for a way to reconnect with my alma mater, and also because I could tell that President Zimmer was providing new pathways for faculty members to conduct research and commercialize their discoveries,” Sanders said. “I wanted to be a part of that—partly due to loyalty but also because as an entrepreneur I’m always on the lookout for new opportunities, of which there are a lot coming out of the University of Chicago.”

Today, Sanders helps UChicagoTech by consulting on scientific and technical issues, and connecting scientists with potential investors. In July, he served on an expert panel for one of a series of Translation Events, organized by UChicagoTech that bring industry experts to campus to advise faculty members interested in translating their discoveries into innovative products and services. The July session focused on biologic therapies.

Sanders is especially qualified to advise potential start-ups devoted to biological products. After graduating from the University he did three postdoctoral fellowships studying: basic and clinical aspects of complement proteins in the blood that help protect against pathogens and contribute to tissue damage in autoimmunity; (at the National Institute of Allergy and Infectious Diseases); clinical rheumatology (at Johns Hopkins University); and basic research on leukocyte adhesion molecules (at the National Cancer Institute).

After leaving the NIH, he worked at a number of biopharmaceutical companies, including Upjohn working in drug discovery and Centocor working on clinical development of therapeutic monoclonal antibodies. Since becoming a consultant, Sanders has worked with more than 50 companies, consulting on a wide variety of issues, including gene therapy, recombinant proteins, monoclonal antibodies, small molecules and mechanical devices. He is particularly interested in the development of new therapeutics for diseases of the immune system.

Sanders also has worked as a venture capitalist and as an individual investor in the life sciences for over 15 years, during which time he has worked on the founding and early stages of development of more than 20 new companies. Sanders now considers himself an entrepreneur, something he calls “completely different”.

“As a venture capitalist, I would manage the investments of others, but as an entrepreneur, I can invest my own time, money and expertise on my own behalf,” Sanders said. “It’s a tough environment right now in which to find funds, but that makes it a good time to be an entrepreneur because there are so many great opportunities to invest in.”