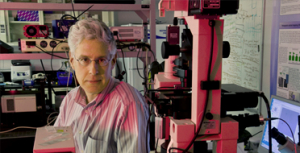 Arryx, a company based on technology invented at the University of Chicago that still has strong ties with the University, is poised to help Haemonetics, the world’s largest manufacturer of automated blood processing systems, expand its products and services into immunodiagnostics, a huge and growing field.

Arryx is based on holographic optical trapping (HOT), a way to handle cells and other microscopic objects in a laboratory. The traps or tweezers pin particles in place or move them around. This technology has broad applications but Arryx has now found its focus, according to Ken Bradley, a founder and former Chief Executive Officer of Arryx and now Vice President of Development for Haemonetics. “Haemonetics acquired Arryx because it provides the science and patent protection to develop advanced diagnostic tools,” he said. “We want to go in this direction because of our expertise with blood, which makes up the bulk of the immunodiagnostics market.”

For Arryx, the road has been somewhat circuitous primarily because its technology has many potential uses. In 1997, two University physicists developed HOT. In 2000, UChicagoTech, the University of Chicago’s Office of Technology and Intellectual Property, and its predecessor, ARCH Development Corp., launched Arryx based on the breakthrough technology.

In 2002, Arryx released its major product, BioRyx 200, that utilizes lasers to grab and move up to 200 microscopic objects simultaneously, with potential applications in healthcare, agriculture, optical communications, information technology, forensics, nanotechnology and research. Then in 2003, David Grier, PhD, one of the University scientists who developed HOT, moved to New York University. It was not until 2006 when Haemonetics bought Arryx for $32 million that the young company began to identify its current focus.

A community of start-ups

As a licensee of the University, Chicago-based Arryx is part of a community of start-ups and established companies that continue to work with UChicagoTech and draw on its resources and contacts, said Alan Thomas, Director of UChicagoTech. “We try to maintain excellent relations with all our licensees, something that has born fruit in multiple ways with Arryx, even though Grier moved to another university.”

Grier continues to advise UChicagoTech, consult with Arryx on scientific issues, and help develop new applications for the technologies Arryx licenses. Meanwhile, UChicagoTech keeps Arryx up-to-date about developments on campus that could contribute to its success. The fact that 20% of Arryx’s 25 employees hail from the University is indicative of the close relationship, especially with the lab of Rustem Ismagilov, PhD, Professor of Chemistry at the University and an expert in microfluidics who has researched blood coagulation.

Grier notes that during the past few years tech transfer at the University “has become much better defined.”

“Having your ideas and inventions actually producing value in the marketplace is rewarding,” he concluded. “Royalties can be put back into the lab, and industrial partners can focus engineering talent on new technologies. Best of all, licensed technology actually gets out into the world where it can do good for people.”