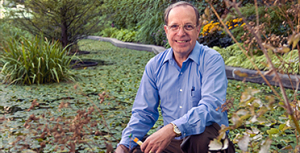 A University of Chicago researcher has invented a technology that overcomes this hurdle by converting wind and solar electrical power into methane (natural gas), which can be made available any time, anywhere, as needed. Microbes similar to those found in the digestive tract of cattle produce the methane by consuming carbon dioxide, water and electricity.

“The process could provide—for the first time—an efficient method for the large-scale storage of solar and wind power in a stable chemical form that can be readily transported to users via an existing infrastructure,” said Laurens Mets, PhD, Associate Professor, Molecular Genetics and Cell Biology. “This could transform sun and wind power from small-scale intermittent players into large-scale primary energy suppliers.”

UChicagoTech, the University’s Office of Technology and Intellectual Property, is helping Mets with the intellectual property, analyzing the business models, and facilitating conversations with potential commercialization partners.

Years ago, Mets began looking for ways to use biological systems to solve energy problems. Initially, he used microbes called methanogens to convert carbon dioxide and hydrogen into methane. The idea is generating interest, especially in Europe where industrial sources of waste hydrogen are available.

Recently, Mets found a way to cut out the need for an external source of hydrogen. In the newer process, a 1-volt charge of electricity (lower than the voltage of a household battery) induces the methanogens to draw the hydrogen they need from water. The process is called electrobiological methanogenesis and can be expressed like this:

In words, carbon dioxide plus water produces methane and oxygen.

The economic success of this technology will depend, in part, on the prices of natural gas and electrical power, which vary greatly. Methane can be transported more efficiently than electricity, so electrobiological methanogenesis provides a feasible model for transporting electrical power from remote solar panels to distant cities. And it could allow wind farms that are idled at night (due to a low demand for electricity) to operate continuously.

Perhaps most importantly, the new technology does not require dramatic change. “Electrobiological methanogenesis, which we demonstrated last year in the lab, relies on an adaptation of a known biological process,” Mets said. “Furthermore, it operates with current electrical power generation technologies and utilizes an extensive energy distribution system that is already in place.

“It could have a big impact on the energy economy.”