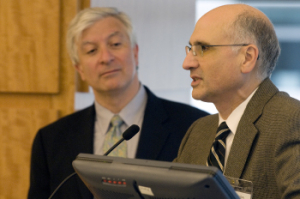 By the end of the year, Midway Pharmaceuticals expects to have successfully navigated the “Valley of Death.”

That’s the period of financing between identifying a drug product candidate and getting it into clinical trials. Many start-up companies fail during this period.

Founded in 2005 with the help of UChicagoTech—the University of Chicago’s Office of Technology and Intellectual Property—Midway has raised about $1.2 million so far. Running a tight ship, the virtual company has outsourced most of its work and employed one person, who is compensated in equity rather than cash.

Today Midway is poised to take its novel method for disarming bacteria in the gastrointestinal tract to the next level through one of two strategies: go it alone, which would require raising about $12 million to $15 million; or purchase a drug that is further along in the clinical development process, which would require raising about $50 million.

“Midway is evaluating several later-stage drugs for acquisition,” said Rifat Pamukcu, President and CEO of Midway Pharmaceuticals. “Even though this is the worst market for raising funds since at least 1988, I’m confident from our discussions that our next round of funding will come together by year-end. We are well-positioned because we have such a strong product and only a small infrastructure to support.”

Midway is based on a proprietary polymeric compound that disarms rather than kills pathogens in the gastrointestinal tract. The compound was developed by John Alverdy, Vice Chairman, Department of Surgery, and Gene Chang in the Department of Medicine at the University.

Their compound and its underlying technology may be able to help millions of patients. The compound is administered orally and can potentially prevent or be used to treat inflammation, infection and sepsis without the use of antibiotics.

“Traditional antibiotics are losing their effectiveness, and bacteria continue to get ‘meaner’ as they adapt and respond to our methods of killing them,” Alverdy said in June at UChicagoTech’s Innovation Workshop Series, co-hosted with the Polsky Center at the Booth School of Business. “We are taking another approach; we’re looking for ‘molecular detente’ between bacteria and the host they inhabit.”

(The Innovation Workshop Series is designed to build entrepreneurial community at the University and give investigators, investors, students and alumni the opportunity to explore ways to translate basic research into impactful products.)

Eventually, the polymeric compound’s underlying technology could be used to develop other agents for many indications in other multi-billion dollar markets, such as the prevention and treatment of hospital-acquired infections and for a range of gastrointestinal conditions. For now, Midway is targeting the prevention of gastrointestinal inflammation and injury from radiation treatment for cancer or bone marrow transplants.

“Typically, cancer radiation wipes out patients’ normal flora, even the beneficial bacteria, and compromises their immune system,” Alverdy said. “This leaves them even more susceptible to infection than they might have been before. In fact, 70% of infections in patients with chemotherapy or bone marrow transplants come from bacteria in the GI tract.

“In the future, we hope to prevent or cure such inflammation and infection by having the patient drink a polymer ‘smoothie’ that will line their entire GI tract with a protective substance, thereby molecularly silencing potentially harmful bacteria.”

Early research indicated that the polymeric compound was effective, and new research being submitted for publication indicates that it prevents injury in rats that received radiation doses similar in scale to the doses that would be administered in humans for the treatment of cancer, according to Alverdy.