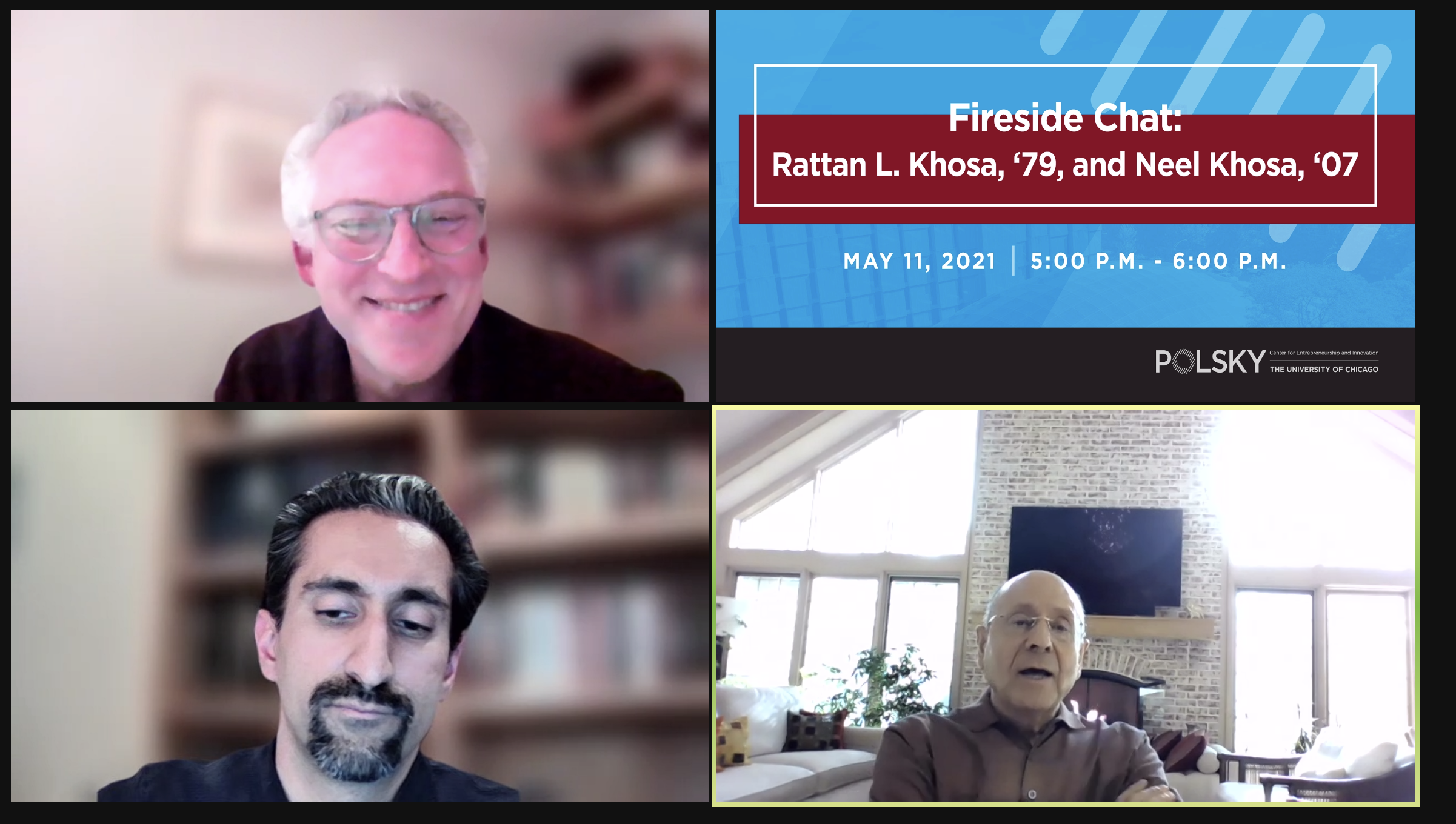 Rattan Khosa, MBA ’79, and his son Neel Khosa, MBA ’07, engaged in a fireside chat with the Polsky Center’s Dan Sachs about running a family business.

Growing up in the family business, Neel Khosa, MBA ’07, sometimes felt that the company his father founded was his “little brother.”

“I had a bit of a sibling rivalry with AMSYSCO,” Neel Khosa said. “There were times when AMSYSCO got attention and I didn’t. There was some jealousy.”

His father, Rattan Khosa, MBA ’79, founded AMSYSCO, a manufacturer of post-tensioning systems used in commercial building construction, in the basement of the family home in 1981. It was a leap he took, he said, out of “desperation” after struggling to find stable footing in his career early on.

“Frankly speaking, it was a way for me to create a job for myself, put food on the table,” said Rattan Khosa, AMSYSCO’s CEO. “That’s the honest truth.”

Rattan and Neel Khosa, now chief operating officer at AMSYSCO, on May 11 sat down for a fireside chat with Dan Sachs, executive director of education and programs at the Polsky Center for Entrepreneurship and Innovation. The Chicago Booth alums discussed what it’s like for father and son to run a business together, how the company weathered the pandemic, and why they bootstrapped the operation rather than take outside capital.

Romeoville-based AMSYSCO is now a leader in its industry and boasts numerous high-profile construction projects, including Argonne National Laboratory, the Minnesota Twins baseball stadium, and the Millennium Park and Midway Airport parking garages in Chicago. 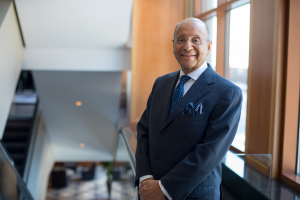 The elder Khosa’s commitment to helping students stems from his own experience overcoming difficult odds.

After receiving his civil engineering degree in his native India, he traveled to the US with $3.75 in his pocket on a research fellowship at the University of Maryland, where he got his master’s degree in structural engineering. A job he had lined up after graduation from Maryland fell through, and with just $60 to his name and two weeks until he had to leave student housing, he took a job in the post-tensioning industry.

Rattan Khosa said he was rejected from Booth twice before he got in, then struggled with classes as he tried to balance school with his job and personal life. More job instability followed as he finished his MBA, and he found himself at a crossroads.

“I was very close to going back to India because I didn’t have the guts to start a business,” he said. His father, he said, convinced him to try.

Operating from his basement, Rattan Khosa landed his first big sale, to a Chicago transportation center, in the first year, and AMSYSCO has been profitable every year since.

He bootstrapped the operation, at one point declining an offer from a construction client to take a 50% equity stake, to maintain the freedom to run the business with a long-term view rather than worrying about short-term profits. “We have done things for the company that if someone was holding the purse strings we could not do,” Rattan Khosa said.

He credits his family’s support for his success, particularly in the early years when the business occupied much of his time and energy. His wife, who had no accounting background, took care of the company’s finances as well as the home. “I would never, ever have succeeded without her contribution, without her support,” Rattan Khosa said. “She stood by me like a rock.”

His son helped as well, licking stamps as a kid and working summers when he got older. But after graduating with a civil engineering degree from the University of Illinois Urbana-Champaign, Neel Khosa did not want to work for his dad.

The younger Khosa instead took a job as a project engineer and then project manager at a construction company before enrolling in Booth. At his father’s urging, he finally agreed to join AMSYSCO, partly out of family duty but also because he saw “untapped potential” that he could help unleash.

Neel Khosa immediately digitized as much of the process as he could, and over five years was able to increase productivity by 50% and reduce human errors by 95%, he said.

His experience working for a construction company gave him insight into the needs of AMSYSCO’s clients and has helped the company stand out for its customer service. “If I hadn’t worked for someone else I wouldn’t have had that perspective,” he said.

Still, father and son do not always see eye to eye. They have had heated debates about how to solve business challenges. But they leave business at the door when family gets together. And they have learned to defer to one another – to the younger on issues of marketing and technology implementation, and to the elder on network relationships.

Where they agree is on the company’s culture. Employees are the number one priority, and they share in AMSYSCO’s profits. Customer service and satisfaction is valued over profit. Suppliers are considered partners and get paid on time. Honesty and integrity are the guiding principles because the family name is on the door. “We can’t afford to tarnish relationships,” Neel Khosa said.

That ethos has guided AMSYSCO during the pandemic, which posed particular challenges on the factory floor where social distancing was impossible. The company focused on employee health, including mental health. Each employee received $350 to take a break and decompress.

The business suffered as construction projects stalled, but there was enough of a financial cushion that no one was laid off. “How you handle bad times depends on how you handled the business in good times,” Rattan Khosa said. “I call it ‘intelligent conservatism.’”

Sachs asked the Khosas for advice to budding entrepreneurs.

Neel Khosa, who did shop drawings and worked the manufacturing line, said it’s important to “get your hands dirty,” both to understand what employees go through and gain their respect. In family businesses, he said, it’s particularly important not to act like “the boss’ kid.”

Rattan Khosa urged entrepreneurs not to listen to people who say you can’t do it – but to know your limitations and plan accordingly.  “Find out what your strength is, your weakness is, and plan,” he said. He also warned against the pitfalls of taking venture capital and encouraged young businesses to bootstrap if they can.

“The joy, the liberty, and the freedom you are going to get — you’ll never get that if someone is giving you money and has control of it,” he said.