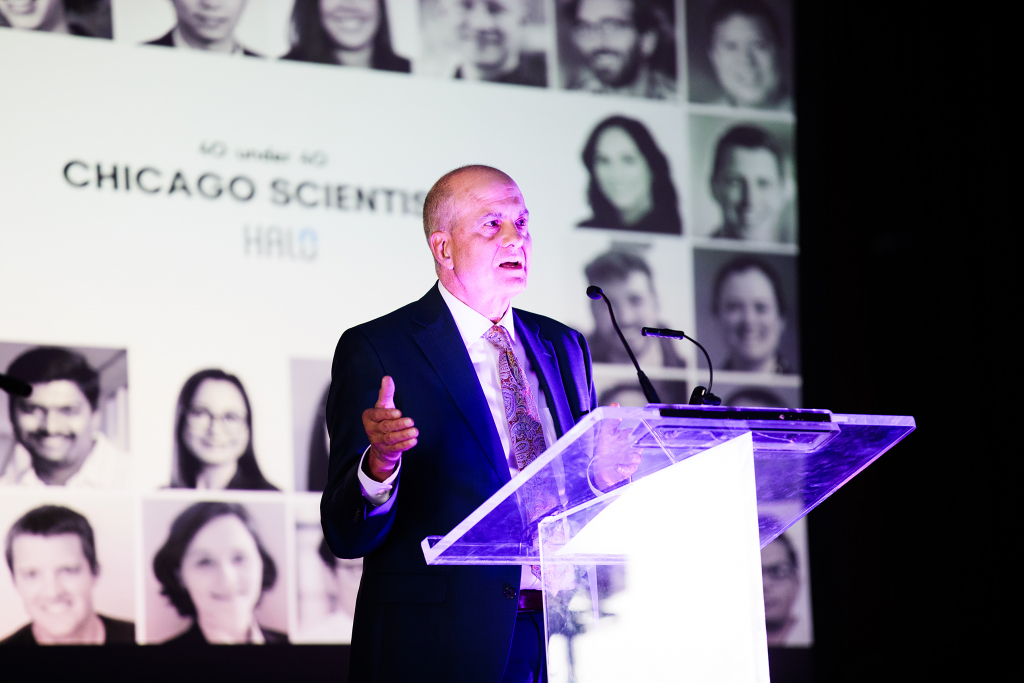 The 2nd Annual Halo Awards took place on Saturday, October at the Museum of Science and Industry, celebrating the city’s “Heroes of Medicine” and the 40 Under 40 Chicago Scientists who are making impacts in a variety of fields. Many UChicago and Polsky-affiliated scientists and researchers were among the honorees, and Halo Cures, the company hosting the awards ceremony, is currently a Polsky Incubator company.

Jeffrey Hubbell, PhD, of the Pritzker School of Molecular Engineering at UChicago, was recognized as one of three “Heroes of Medicine.” A serial entrepreneur, Dr. Hubbell has worked with the Polsky Center on commercializing a variety of his discoveries. One of his current projects is ClostraBio, a startup he co-founded with support from the Polsky Center, which is focused on treating food allergies.

Along with Dr. Hubbell, eight of the 40 Under 40 honored were UChicago researchers, all of whom are affiliated with Polsky:

The associate vice president and head of the Polsky Center, Jay Schrankler, had the opportunity to introduce the entire 40 Under 40 group to celebrate these up-and-coming Chicago scientists.

Schrankler joined the University of Chicago this past summer to become the new head of the Polsky Center of Entrepreneurship and Innovation. Prior to this role, he was associate vice president for the Office for Technology Commercialization at the University of Minnesota, where he supported the creation of 140 research-based spinouts. Prior to that, he was an executive at Honeywell International.

“There are many examples of innovation in Chicago,” Schrankler said during his remarks at the event. “The city is full of scientists and researchers driven to push past old norms. Publications are not enough for them. They are driven to move beyond the lab and deliver life-saving inventions to patients all over the globe. This year’s Halo 40 Under 40 exemplifies this new era of research. During the past decade there has been a change in mentality within the scientific research community. This generation of researchers has a strong desire to see discoveries move from bench to bedside. They want to see people benefit directly from their research.”