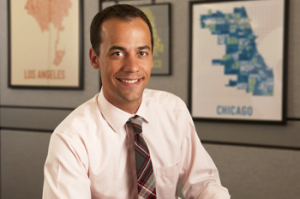 One year ago, as the University of Chicago’s first not-for-profit spinoff, UChicago Impact was conducting just one pilot project in Michigan City, Indiana. Today it has sold its educational tools and services to schools in 19 states and 33 cities nationwide, including Chicago, Detroit, St Paul, Baltimore, Boston and New York. In addition, it has a host of additional prospects, including schools in China, England and India.

UChicagoTech helped launch UChicago Impact by assisting with strategy, contracting, networking with potential partners, securing intellectual property and organizing operations. It also helped the spinoff raise more than $2 million in donations, including funds from the University of Chicago, which is the sole owner of UChicago Impact.

“This is an incredibly exciting initiative on the part of the University and offers a model that others could follow,” says Tim Honaker, chief operating officer of UChicagoTech.

“UChicagoTech has been an invaluable partner and continues to have a seat at the table as we move from start-up to full scale operations,” Montgomery says.

The company was not launched to create a profit; rather it was launched to improve the quality of schooling and help create an evidenced-based profession. The organization has found this not-for-profit status empowering. “All earnings will be invested back into the improvement of urban schools,” Knowles says. “That is appealing to our customers, including states, school districts and charter management organizations. And it is appealing to individuals and foundations who want to make a difference with their investments.”

UChicago Impact’s business model is to fund growth and product development through donations from philanthropies and foundations while funding operations through sales. “Operating like a business, UChicago Impact is on track to be self sustaining by 2014, at which time it will start to generate revenue for the Urban Education Institute so we can continue to undertake research and development on various fronts,” said Timothy Knowles, director of the University of Chicago’s Urban Education Institute.

Since its launch, UChicago Impact has been able to develop synergies between its products and services. For example, using 5Essentials in a school that was already using STEP, leaders were able to identify that some teachers were not collaborating and then to adjust the training regimen accordingly. “Once you get into a school, you can understand its overall environment and try to address multiple issues,” Montgomery says. “We can tailor our work to the situation. The package of our tools and services is always more effective than the sum of its parts.”

With a consortium of researchers and 1,700 students at its four campuses, the University of Chicago is able to develop tools that are based on research and rigorously tested in classrooms before they are disseminated.

“For decades people have been talking about changing education and improving schools, but with little impact,” Montgomery says. “We connect research to practice, diagnosis to prescription, for reliable improvement.”