Building on University of Chicago Connections 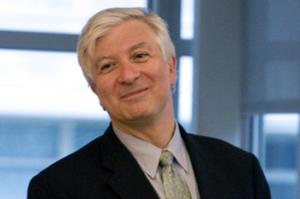 Rifat Pamukcu, MD, has been greatly influenced by his work at the University of Chicago.

While he was a Fellow in Digestive Diseases at the Pritzker School of Medicine, one of his patients went on to become a business partner.

His mentor, Eugene Chang, MD, professor of gastroenterology at the University, shared various compounds that had the potential to be developed into pharmaceutical products. One of those drugs formed the basis of Midway Pharmaceuticals, of which Pamukcu is CEO.

Midway licenses intellectual property from the University of Chicago, something that has given Pamukcu the opportunity to work with UChicagoTech, the University’s Office of Technology and Intellectual Property.

“The science, medicine and business I learned at and through the University has helped me in everything I’ve done,” he says.

Midway develops polymer-based and other technologies to treat conditions—including inflammatory bowel disease, irritable bowel syndrome, immunocompromised cancer patients and radiation enteritis—caused or influenced by gut bacteria. The polymer was developed by a colleague of Chang’s, John Alverdy, MD, vice chairman of the University’s Department of Surgery.

Pamukcu, who describes himself as a scientist-entrepreneur, works from Spring House, Pa., near Philadelphia. As CEO of Midway, he has been forced to look for creative ways to build and finance the company due to the fact that it has been difficult during the past couple years to raise financing for biotechnology products and services.

One creative step was to spin-off Midway Food Animal Sciences, a seed-stage company with products that replace antibiotics used in food animals. And Midway is developing a polymer-based compound to use as a component of human food for certain medical conditions.

Prior to running Midway, Pamukcu was a co-founder and director of Cell Pathways Inc., which developed drugs to prevent and treat cancer. As CPI’s chief scientific officer and executive vice president of research and development, he directed the basic science, preclinical drug development, clinical research, regulatory programs and aspects of manufacturing. In addition, Pamukcu was instrumental in raising more than $140 million of investment capital and participated in the transformation of CPI from a private to a publicly traded company. OSI Pharmaceuticals acquired CPI 2003.

Since then, Pamukcu has been a biopharmaceutical industry consultant. He serves on the Oversight Committee of both the Wallace H. Coulter Foundation’s Translational Research Awards Program and Coulter’s Translational Partner Grant Program at Drexel University. In this capacity, he evaluates grant applications for translational projects, where the goal is to get devices, diagnostics and drugs into the clinic as quickly as possible.

“Working with the Coulter Foundation gives me the opportunity to mentor talented faculty members and work on promising projects while keeping me up-to-date on the market,” Pamukcu says.

Closer ties between universities and industry is one thing Pamukcu has noticed over the past several months. Large pharmaceutical companies are collaborating more and starting to outsource some of their basic research, he says, adding that schools like the University of Chicago are well suited to pick up that role.

Also, after holding back for years, venture capital and angel funds are starting to invest in the both pharmaceuticals and biomedical devices.

“For the past few years, I’ve been fairly negative about the biomedical market, but we may be turning the corner,” he adds. “This bodes well for UChicagoTech because it will increase the pace at which technology is pushed out of the University, commercialized and monetized.”