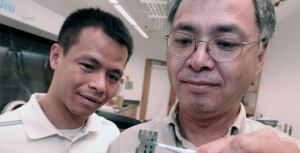 Solarmer Energy Inc. is developing plastic solar cells for portable electronic devices that will incorporate technology invented at the University of Chicago.

The company is on track to complete a commercial-grade prototype later this year, said Dina Lozofsky, vice president of IP development and strategic alliances at Solarmer. The prototype, a cell measuring eight square inches (50 square centimeters), is expected to achieve 8 percent efficiency and to have a lifetime of at least three years.

“New materials with higher efficiencies are really the key in our industry. Plastic solar cells are behind traditional solar-cell technology in terms of the efficiency that it can produce right now,” Lozofsky said. “Everyone in the industry is in the 5 percent to 6 percent range.”

The invention, a new semiconducting material called PTB1, converts sunlight into electricity. Inventors Luping Yu, Professor in Chemistry, and Yongye Liang, a PhD student, both at the University of Chicago, and five co-authors describe the technical details of the technology in an online article published Dec. 18, 2008, in the Journal of the American Chemical Society.

“Yongye is very knowledgeable and skillful. Very creative,” Yu said. “He is mainly responsible for the progress of this project.”

The active layer of PTB1 is a mere 100 nanometers thick, the width of approximately 1,000 atoms. Synthesizing even small amounts of the material is a time-consuming, multi-step process. “You need to make sure what you have is what you think you have,” Yu said.

The University licensed the patent rights to the technology to Solarmer last September. The license covers several polymers under development in Yu’s laboratory, said Matthew Martin, a project manager at UChicagoTech, the University’s Office of Technology and Intellectual Property. A patent is pending.

An advantage of the Chicago technology is its simplicity. Several laboratories around the country have invented other polymers that have achieved efficiencies similar to those of Yu’s polymers, but these require far more extensive engineering work to become a viable commercial product.

“We think that our system has potential,” Yu said. “The best system so far reported is 6.5 percent, but that’s not a single device. That’s two devices.”

By combining Solarmer’s device engineering expertise with Yu and Liang’s semiconducting material, they have been able to push the material’s efficiency even higher. Based in El Monte, Calif., Solarmer was founded in 2006 to commercialize technology developed in Professor Yang Yang’s laboratory at the University of California, Los Angeles. The company is developing flexible, translucent plastic solar cells that generate low-cost, clean energy from the sun.

Yu began working with Solarmer at the suggestion of UCLA’s Yang, a professor of materials science and engineering. Yu’s research specialties include the development of new polymers, long chains of identical atoms that chemists hook together to form plastics and other materials.

Yu’s research program includes funding from the National Science Foundation and a Collaborative Research Seed Grant from the University of Chicago and Argonne National Laboratory. Solarmer has entered into a sponsored research agreement with the University to provide additional support for a postdoctoral researcher in Yu’s lab. The company looks forward to the identification of new polymers as a result of this collaboration, Lozofsky said.

Silicon-based solar cells dominate the market today. Industry observers see a promising future for low-cost, flexible solar cells, said UChicagoTech’s Martin. “If people can make them sufficiently efficient, they may be useful for all sorts of applications beyond just the traditional solar panels on your house rooftop,” he said.