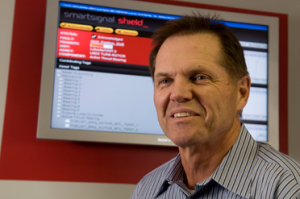 In the early 1990s, the U.S. Department of Energy asked researchers to develop a better tool for predicting problems at nuclear facilities after the failure of a coolant pump forced an experimental reactor shutdown. The DOE buried several faults in 18 months’ of data from a nuclear power plant and held a worldwide competition challenging researchers to find the problems.

Scientists at Argonne National Laboratory not only found the hidden faults, but their software discovered previously unknown problems. They quickly realized they had developed a technology that could be patented and commercialized.

In 1999, the University of Chicago helped these researchers launch SmartSignal. Today, that company employs the same core technology, now expanded and refined. (Also, it has developed new technologies.) SmartSignal licenses the core technology from UChicagoTech.

“Over the past decade, SmartSignal developed from two people and a bright idea into a worldwide powerhouse,” says Alan Thomas, Director of UChicagoTech. “One of our best success stories, SmartSignal helps power plants, refineries and airlines save money and operate more efficiently and safely without interruption.”

SmartSignal provides software and services that monitor machinery and equipment, analyze the data, and diagnose developing problems before they become serious. It monitors up to 10,000 pieces of equipment 24/7 at more than 300 sites worldwide. And its software programs, which started with about 250 lines of code, now contain close to 2 million lines of code.

Profitable since 2007, SmartSignal had revenues of $22 million last year. Despite the recession, it expects to be profitable again this year. The company is in the early stages of working with its customers to develop an industrywide database that will allow plants and refineries to compare their performance with industry benchmarks.

Meanwhile, SmartSignal, which continues to work closely with Argonne and UChicagoTech, is expanding its reach, particularly in Europe and Asia. In addition, some former employees have spun off a company to explore ways of applying the core technology to monitoring and assessing patient care.

Much of SmartSignal’s success can be attributed to a 2004 decision to switch from a shotgun to a rifle approach, according to Jim Gagnard, SmartSignal’s CEO.

“Most startups try to sell to anyone who seems likely to buy,” he says. “Instead, we analyzed our products and decided to increase our focus on a few specific industries, including power generation, now 60% of our business, and oil and gas, now 35%.”

Being closely connected with the power industry gives SmartSignal “green” opportunities. “Our monitoring and diagnostic services can make a coal plant greener by improving its efficiency,” Gagnard says.

SmartSignal signed its first contract with a provider of wind power last year and a second one this year. And when carbon capture and sequestration become a reality, SmartSignal will be there to closely monitor the great number of pumps and compressors that will be required to move the CO2 to storage, Gagnard says. “We expect to play a major role in the coming shift to alternative, sustainable energies.”

His advice to new companies: Watch expenses, especially personnel costs. “For an early-stage company, cash is king. In this challenging economy, a new company has even less runway than it might have had a few years ago.”

And Gagnard’s advice to inventors and investors: Keep innovating. “Americans have always been the best in the world at developing new ideas and products, so we need to continue to be the innovation engine for the world.”